When patients begin to understand the importance of vascular health, they naturally think of their arteries. They become aware of arterial stiffness, the dangers of plaque, and the resulting threat of heart disease or stroke. By contrast, few patients have a clear idea of the microvasculature. Yet from a clinical perspective, it can be just as important as the arterial system.

In this blog post, we’ll take a brief look at microcirculation, its role in several major diseases, and in particular a key component of the system that is attracting growing attention—the endothelial glycocalyx.

The arteries and veins are connected by an astonishingly lengthy system of arterioles, capillaries and venules — some 60,000 miles if stretched end to end. Arterioles, with their layer of vascular smooth muscle (VSM), serve to control blood flow within the microvascular system. They lead to the smaller capillaries, which feed contents from the blood to the tissues. Blood flows out of the capillary network into the venules, and from the venules into the venous system.1

The microvasculature plays a decisive role in delivering nutrients and oxygen to the tissues, and removing CO2 and cellular waste. Strikingly for such a massive system, it contains only a fraction of the total blood volume, between 5% and 10%, and not all capillaries are perfused all the time.

The system is highly dynamic, filling some capillaries with blood and emptying others. In many tissues, only about 20% to 30% of the capillaries are perfused with blood under resting conditions.2 There is also a constant process of angiogenesis, creating new blood vessels as need arises.

Every one of the blood vessels, no matter how small, has on the luminal side a single-cell endothelial layer. And the entire endothelium, throughout the microvasculature, is covered by a semipermeable, gel-like structure, the endothelial glycocalyx (EGX). The EGX is primarily composed of proteoglycans and glycoproteins.3 Because of their important signaling functions, these glycan molecules are the focus of a fast-growing area of scientific and medical research, glycobiology.4,5 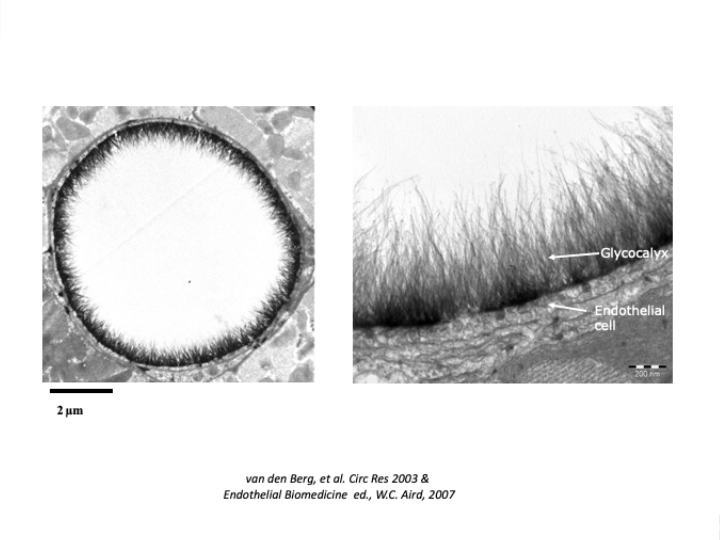 The clinical significance of the EGX has been slowly coming to light during the past two decades. In the first place, its sheer size indicates its importance. The average EGX is estimated between 1 and 2 microns.3,6 Kolarova et al report:

“Interestingly, the glycocalyx has been estimated to comprise as much as 25% of the total intravascular space in humans, which would yield an average glycocalyx thickness of up to 2 𝜇m.”7

The total volume of the EGX in the human body is about 2 liters,8 nearly half the volume of all the blood. Unlike the arteries, our microvessels consist of a single layer of endothelial cells often thinner than the EGX layer that covers the luminal surface.9 The EGX can also take up more than a third of the total volume of a given capillary.

In fact, there is more EGX than blood by volume in the entire microcirculatory system.

Not only is the EGX a relatively large structure, but it plays active roles in regulating blood vessel permeability, nutrient exchange, and the removal of CO2 and cellular waste. Degradation of the EGX is implicated in many conditions, from cardiovascular disease10 to stroke11 to kidney disease.12 Yet despite its importance, the challenges and therapeutic opportunities presented by the EGX have yet to be fully recognized.

Perfusion, the distribution of blood through the tissues and organs, is fundamental to almost every physiological function. Research has uncovered an important relationship between perfusion and the health of the EGX. It’s complex, and there is still much to be learned.

However, long-term loss of EGX is correlated with an overall reduction in perfusion.13 This in turn compromises the essential exchange of nutrients and oxygen, and enables edema, the seepage of fluid into the tissues and organs.

Researchers have established that a diminished EGX is correlated with reduced perfusion, loss of capillaries, and increased permeability leading to edema.

This correlation has been associated with many conditions, such as:

EGX dysfunction in the microcirculation can also indicate macrovascular problems, including functional lesions of the arterial wall.20

Patients with diabetic neuropathy or erectile dysfunction will readily understand the importance of the small blood vessels. Other patients may need educating on the entire vascular system, not just the arteries, and its role in their health. This patient education material may help to have that conversation:

In particular, patients should know the pivotal role of the EGX. When they grasp how vast, dynamic and essential this system is for the flow of nutrients and oxygen to their organs, they will be more inspired to accept the lifestyle and medical interventions needed to maintain their vascular health.

IMPORTANT NOTICE:
The information on this webpage is for licensed healthcare practitioner education only, and is not to be disseminated to the general public.

Numerous cellular, animal and human studies have been conducted to evaluate the biological activities, mode of mechanisms, and therapeutic benefits of Arterosil, a patent-pending nutraceutical. Studies include:

*These statements have not been evaluated by the Food and Drug Administration.
This product is not intended to diagnose, treat, cure or prevent any disease.