A Single Point of Failure?

There’s been a lively debate in cardiovascular circles about shifting focus from the lumen to the vessel wall. According to the extreme version: “It doesn’t matter what’s in the blood. All that matters is the health of the arterial wall.”

It’s good that more attention is being given to the endothelium. A robust vessel wall makes for less intrusion of LDL and plaque buildup. Beyond atherosclerosis, there are many clinical implications when the endothelium is compromised.

But of course it does matter what’s in the blood. You still want to monitor lipid levels and other markers of vascular health.

A fresh perspective is needed. 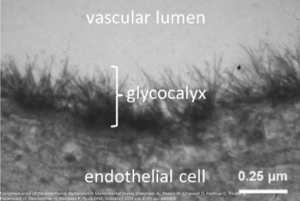 What’s missing in this debate is the structure that stands between the lumen and the wall: a microscopically thin layer covering the entire endothelium, called the endothelial glycocalyx (EGX). This layer is no mere passive protection. It’s a smart barrier – a highly intelligent intermediary that communicates between the flowing blood and the endothelium.

For example, the EGX picks up changes in shear stress and signals to the endothelium to produce nitric oxide. It also monitors and helps regulate the presence of coagulation factors. And it plays a key role in managing inflammation, in particular by inhibiting leukocyte adhesion.

In other words, you can look on the EGX as a single point of failure. If it is compromised, there’s a potential cascade of resulting pathologies. Just one example: the cytokine storm and resulting sepsis observed in COVID-19 always involves a damaged EGX.

It turns out the EGX collapses quite easily, and sometimes very rapidly. It is vulnerable to inflammation, stress, high-glucose diet, aging, and a variety of disease conditions. On the plus side, it can be restored rapidly given the right support. The EGX is both naturally fragile and naturally resilient. 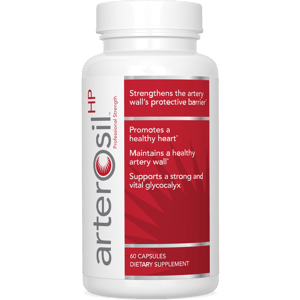 Arterosil® is the only product clinically proven to protect and restore the endothelial glycocalyx. Human, animal and in vitro studies clearly have demonstrated the regenerative activity of Arterosil, which contains specialized sulfated polysaccharides derived from a rare green seaweed. These provide the building blocks needed to restore a compromised glycocalyx.

Numerous cellular, animal and human studies have been conducted to evaluate the biological activities, mode of mechanisms, and therapeutic benefits of Arterosil, a patent-pending nutraceutical. Studies include:

*These statements have not been evaluated by the Food and Drug Administration.
This product is not intended to diagnose, treat, cure or prevent any disease.